Brenna Hinrichs has written 4 posts for The Digital Bullpen

USF student takes a bite out of competitive eating competitions

For Eric Biel, eating is not only a means of survival – it’s a way of life.

“I’ve always been able to eat,” said Biel, staff assistant at the Child and Family Studies department and mathematics student at USF.  “My mom said I never even needed a bottle.  Alright, maybe if you if ask my mom that might be an exaggeration, but I needed solids early – the bottle just wasn’t cutting it.”

So it was no surprise that Biel went on to be a competitive eating champion.

Equipped with the ability to eat large amounts of food quickly, Biel started participating in friendly rivalries in high school with friends at barbeques.  He said the first competition was who could eat the most hotdogs and then the competitions began to include more complicated foods.

“There’s always a competition with friends,” Biel said.  “We would eat maybe five hamburgers at a time.  If you can eat it, then there’s a number you can put on it.”

Biel’s competitive spirit carried on through college when he got the opportunity to compete in the 2006 Moe’s Southwest Grill “Own the Road” challenge, where he represented the Fort Myers store.  Leading up to the competition, he trained in the store to prepare for the event, which was to see which participant could eat three Moe’s Homewrecker burritos in the fastest time.

Biel beat his competition in the second heat, eating three burritos in 3 minutes and 15 seconds.  After winning, he competed against the winner of the first heat.  Because Biel had won his round with a significantly lower time than his opponent, he felt he did not have to push himself as hard to win the next round.  Unfortunately, he judged his opponent inaccurately and Biel’s time increased dramatically, resulting in him losing the round.

“I was disappointed in myself,” he said.  “I judge myself who I’m going against, and my consumption rate slowed from my competition.”

After moving to Tampa from Naples in 2007 and accepting the staff assistant position at the Child and Family Studies department at USF, Biel overheard a few co-workers discussing a local ice cream eating challenge.  Biel decided to compete in the challenge, hosted by the Old Meeting House Ice Cream store in Tampa in July 2007, during National Ice Cream month.

“The ice cream was very hard and I was biting it like it was a well-done steak,” Biel said.  “I couldn’t eat cold foods for two weeks afterward.  My tongue and cheeks were numb from biting them so much.”

Due to his success the previous year, Biel competed again in the ice cream eating contest in 2008.  This time, he said, the competitors were much more qualified and the event was more publicized.  Biel ate four pints of ice cream in 2 minutes and 30 seconds, coming in at second place after losing by approximately 20 seconds.

Aside from being a competitive eater, staff member at USF, and student, Biel also participates in other activities on-campus.  For the past three years, he has been the adviser for the USF skimboarding club.  While taking a physics course, Biel met Nathan Preseault, the club’s president.  Preseault needed a USF employee to advise the club, and Biel was more than happy to assist.  Years later, the club is going strong and Biel has become an invaluable member.

“I originally asked Eric to become our club adviser due to him being an eligible candidate,” said Preseault.   “At that time I did not realize the drastic positive influence he would have on the future success of the club.  Eric’s dynamic personality allows him to connect and share information with a wide range of individuals.”

Although Eric is now concentrating more on his job, attaining his degree, and working as the adviser for the skimboarding club, he said he may be open to more competitive eating.

A game of pool is a welcomed break between classes 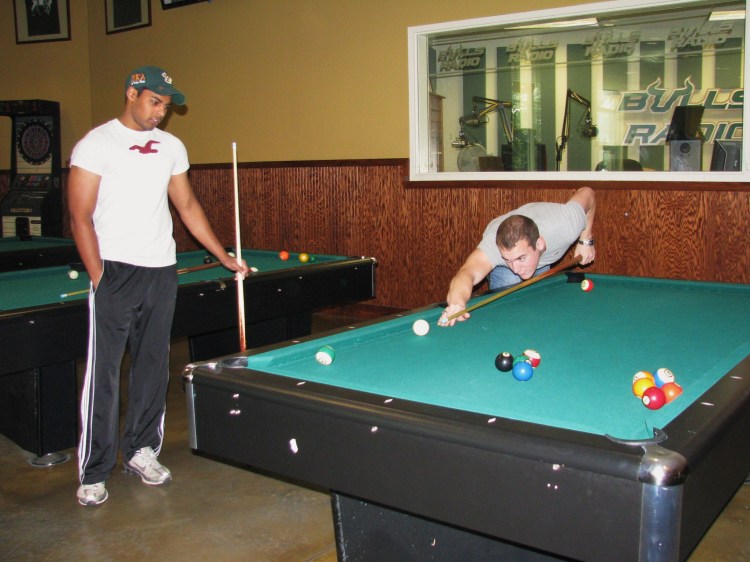 Shaun Ram, left, a sophomore majoring in Pre-Med, and Cory Bone, a freshman majoring in Criminology, enjoy playing pool at the Beef O’ Brady’s in the Marshall Student Center.  The two students meet there often as a way to pass time in-between classes.

Thang Nguyen, a new USF international student, watched in amazement as his professor walked into class in a T-shirt and jeans on the first day of the fall semester.

“In Vietnam, college is very formal,” said Nguyen.  “This is a new experience for me.”

Nguyen is one of 1,745 international students enrolled at USF this semester, according to the USF World website.  These students come from all around the globe, particularly China and India, and many are experiencing culture shock as they become acquainted with college life in the U.S.

The integration of international students into the USF student population is what makes our campus more diverse and ultimately helps all students, said Roger Brindley, associate vice president for Global Academic Programs at USF.

“USF offers world-class programs and we are very committed to student success,” said Brindley. “We give international students an experience that is comparable to home and we give them the social experience as well.”

The social aspect of universities in the U.S. is what makes the college experience memorable for many students, particularly international students.  There is a lot of student involvement on this campus, Nguyen said as he motioned to the large group of students listening to music and enjoying a barbecue held on the courtyard of the Marshall Student Center.

Valérie El Houssine, a freshman from Belgium, said the large size of USF was very surprising.

“My first impression of USF was that it was huge,” El Houssine said.  “Trying to find my classes the first day of school was an adventure.”

In Belgium, college campuses are much smaller, she said.  A few of the buildings here at USF would be the size of a whole university back at home.

Although USF Tampa is large, amenities such as the USF Bull Runner have assisted students like El Houssine get to class and on-campus activities quickly.

When she inevitably got lost on campus the first few days of classes, other USF students were eager to assist.

“Students were very helpful,” she said.  “They helped me in class when I needed to get caught up with my notes and everyone spent time getting to know me.” 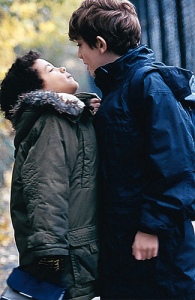 photo from http://www.flickr.com/photos/pimkie_fotos/ some rights reserved

Bullying and suicide among children and adolescents is becoming more complex with the increased use of technology and social media.

Stephen Roggenbaum, the assistant in research at the University of South Florida’s Department of Child and Family Studies, said social media provides an additional vehicle for bullying.

“Today, bullying can take the role of electronic messaging,” he said.  “Texting, Twitter, Facebook – all can be set up to bully someone.”

The use of social media as an outlet for bullying became a prominent issue after several adolescents committed suicide after being taunted over the Internet.

Although bullying might have been assumed to be the reason for those suicides, that assumption is incorrect, said Roggenbaum.  The factors influencing suicide are so dynamic there is not just one cause.

“There is no link between bullying and suicide,” he said.  “In an effort to report those cases, it seems to be the straw that broke the camel’s back – not necessarily the reason for the suicide.”

Instead, the effects of bullying are the factors leading to suicide.  Bullying can be a contributing factor leading to anxiety, depression, loneliness, and low self- esteem, he said.  Those are the risks of suicide.

Children who are at risk may exhibit the following symptoms: behavioral changes over a period of at least two weeks, including eating patterns, social isolation, withdrawing from activities that used to be enjoyable, and changes in sleep.  Kids and individuals who are vulnerable and become depressed may need to seek professional guidance.  In order to move on from bullying, Roggenbaum suggests strengthening coping skills, relying on a social network, and engaging in general well-being activities.

Storie Miller, the communications and marketing officer of the Department of Child and Family Studies at USF, said bullying has recently received more attention in regards to suicide.

“Bullying has been more of a focus in the last few years than ever before,” she said.  “Suicide prevention has been an important topic within our department for a long time.”

The Department of Child and Family Studies has written, along with contributions from Roggenbaum, the Youth Suicide Prevention School-Based Guide.  This publication is used to assist schools with their suicide prevention programs.

Many states have also recognized the need for a law regarding bullying in schools, including Florida.  The ‘Jeffrey Johnston Stand Up For All Students Act’ became a Florida law after Jeffrey Johnston committed suicide after being bullied by his peers.

Vickie Ahrens, a teaching assistant who works with autistic children, is familiar with being bullied in school.  It began in elementary school, around second or third grade.  She said bullying is still prevalent in schools and has seen it happen to a variety of students.

“I work with special needs kids, but I see it going on in other classrooms,” Ahrens said.  “It’s definitely there.”

Ahrens is among the 80 percent of people Roggenbaum said go on to live a life without serious ramifications from bullying.

But being bullied has made her more understanding.

“My experience with bullying gives me the ability to empathize,” Ahrens said.  “I know how it feels to be in that situation.”