Marissa LaCarrubba has written 4 posts for The Digital Bullpen

Jason Sorrow, who has been piercing since 1995, works at Platinum Tattoo on Bearss Avenue. He says a micro dermal piercing is an implant of a piece of jewelry with an anchor attached to it that is layered between the sub dermal and the top two layers of skin. “I make an incision with an 8 inch gage needle and it makes a perfectly good slit right down through the layers of skin,” he says, “the anchor has holes in it so when it is popped in the skin grows through the plate to lock itself in place.” The skin heals and grows through the anchor in 4 to 5 days.

Sorrow says micro dermals are one of the less painful piercings to get. Sorrow has a micro dermal piercing on his face by his left eye. (Pictured to the right.) He had his right side done but he took it out, he said the removal felt like a cigarette burn.

Sorrow says this trend began in 2000 but today it is becoming even more widespread. In the last 90 days Sorrow has done over 60 dermal piercings. He says the piercings are popular because they are a form of being different and everything about art is being different. He also said there was a survey conducted in Clearwater Beach recently about the number one thing that attracts a person to most females on the beach and 90 something percent said side tattoos and micro dermal piercings. The survey was out of 100 people. Sorrow personally thinks that micro dermals just look really good.

Tj Peets has been working at Atomic Tattoo located in the Westfield Brandon Mall since it opened in January 2009. Peets has been a body-piercing technician since 2001 and he says the interest for dermal piercing has been around for years but Florida didn’t legalize the piercing until 2008. “It’s the newest thing,” he explains, “it’s something that everybody doesn’t have yet.” Peets says the most recent requests have been getting the little studs as the eyes on a tattoo that a customer already has. For example, they have a dragon or cat tattoo so they want the dermal piercing as the tattoo’s eyes.

As for infection, both Sorrow and Peets say it doesn’t happen much. They explained that a dermal piercing doesn’t have a higher chance of infection compared to regular piercings. “It is all on operator error,” says Sorrow, “it is self healing because your plasma and skin will heal itself.” Touching can cause infection because of the bacteria on a person’s hands, so until it heals customers are encouraged to leave the piercing alone.

Since 1995 Sorrow has only had one person have an infection and it was not from a dermal piercing. “It’s all about how clean the procedure is done,” says Sorrow, “and in aftercare products such as Bactine and H2Ocean spray.”

Both body-piercing technicians made it clear how important after care and healing time is. The healing time is very important for these, and all, piercings. Peets says the healing process is dictated by a person’s body, but most piercings take a couple of months to heal.

“Infection is not as popular as rejection,” says Peets, “if your body doesn’t like where the piercing is, it will reject it.”

Jenna Rushing went to Atomic Tattoo in the Westfield Brandon Mall for two dermals a few inches apart on her chest. (Pictured to the left.) Rushing, a USF junior, had to get hers redone because her body rejected the placement and they healed incorrectly. She went back and had it fixed by Peets. Rushing said the removal was painful but since then she has had no problems and the scars are unnoticeable. Her piercings were $120 and took only 10 minutes to do.

Mike Stelma, a USF junior, says he personally would never get one. “But they do make a person’s look very unique and different,” he says.

Rushing wanted the piercings because she thought it was unique; she first saw dermals on a co-worker and decided she liked the way they looked. She got the placement idea from “TrueLife”, a TV show on MTV.

“I want more but it’s so expensive,” Rushing says, “when I do get another one I want it to be in a tattoo, like outlining the petals of a flower or something.”

Jenna videotaped the first time she got her dermal piercings. Her video is on Facebook, below is the link to the website. WARNING! The video contains swearing. http://www.facebook.com/video/video.php?v=1539660218205

The Toughest Bull competition included the following events in order from start to finish: 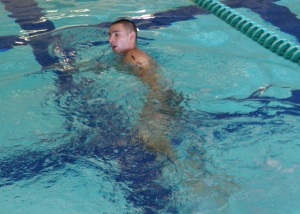 Midshipman Stelma completing his swim with a side stroke.

Cadet Tanner Dieppa nearing the end of his 200 pushups.

Participants were broken up into different groups of four or five, and each group was ten minutes apart.

Naval ROTC members who did not participate in the competition volunteered to hand out water or food, count pushups and sit ups, and keep track of the time.

This year’s Toughest Bull was a trial run for the Naval ROTC, and they eventually hope to open the annual competition up to civilians.

It was a long day on Feb. 26 for Air Force ROTC cadets from many different schools as they began competing for the annual Lime Cup at around 8 a.m. The Lime Cup competition is divided into several different sports, with each sport having its own winner. In the end there was an announced overall Lime Cup winner.

“We’re hoping to claim the Lime Cup back after UCF won the previous year,” said Rob Sadusky, a USF senior in AFROTC and one of the main cadets in charge of the Lime Cup.

The events and winners were:

The overall standings for the Lime Cup were as follows:

The Army’s PT test is in the process of changing for the first time since 1980.

Below describes how the test is changing:

According to Sgt. 1st Class Beck the 60-yard shuttle run is completed by running from point A to point B, and then jogging back from point B to point A multiple times. The standing long jump will be graded on how far one can jump from a standing position without getting a running start. (Pictured below)

All events have a specific number that cadets are supposed to meet. The number is determined by what age group they are in. The time standards for each age group and event are still being determined.

Two other main changes that are included in this PT test are new age groups and scoring practices. Men and women will now be scored the same. Men and women are scored on two different scales, this new PT test will eliminate that and have both men and women scored on the same scale. As for the age groups, the 17-21, 22-26 and 27-31 will turn into just one group for those 30 years old and younger.

Sgt. 1st Class Beck said this new PT test is hoping to lower risk of injury and become more of an anaerobic workout rather than the current aerobic PFT in order to help cadets in combat. 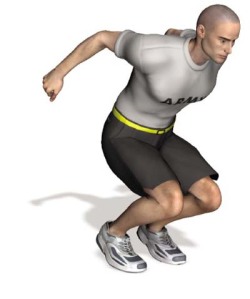