Hi, I’m Ron Algood, a Tampa native and a student at The University of South Florida. I have over twenty years of experience in two distinct career fields: One, as an international travel consultant, and two, as a professional ballroom dance instructor and competitor.
Ron Algood has written 5 posts for The Digital Bullpen

Swing is a happening thing, again!

Every weekend hundreds of college students in the Bay area are finding their way into dance halls to participate in the latest dance craze, swing dancing.

According to Loran, swing dancing, which originated in the 1940s, has never actually gone away. “It just reinvents itself every time a new generation gets a hold of it. The last big resurgence of the dance was in the 1990s which lasted a few years,” said Loran.

One of the longest, continuous running swing dances is just three blocks away from the Hillsborough Community College Dale Mabry campus. EverySunday from 8 p.m. to midnight, The Swing Gang of Tampa Bay hosts a swing dance at the Zendah Grotto Dance Hall, located at 4402 W. Ohio Ave.

END_OF_DOCUMENT_TOKEN_TO_BE_REPLACED

So When I got the chance to go see Blood Wedding, a play by Federico Garcia Lorca, I jumped on it.  Not just because of the flamenco dancers, but because of the lessons they can teach us.  The play was put on by the University of South Florida’s School of Theatre and Dance, and it was the first directed by Freddy Mercury.

Written in 1932,  Blood Wedding follows two Spanish lovers with two problems: the man is already married to another, and the woman is about to be married to someone she doesn’t really love.  I know, it happens all the time in America. The only difference is, here they would end up on the “Jerry Springer Show” instead of being in a play about love and tragedy.

But enough of that, I’m not qualified to critique acting performances—only dance performances. Although the dancing in the play was limited, it served up tremendous dose of Spanish culture. That’s the lesson I want to share because it can help us better understand why some dance partners get into trouble.

The Spanish dances are deeply rooted in a culture where the man is the dominant figure in the relationship. And as difficult as that may be for the modern American woman to understand, it has its place in the world of dance.  Even in modern American ballroom dancing, the man leads and the lady follows.  However, it’s this particular phrasing that I think gets us into trouble. It sounds a little too much like “Me Tarzan, You Jane.”

I prefer to put it this way: the man invites the lady, and then (and only then) she decides if she’s willing to accept it. In other words, the man is the frame, the lady is the picture. Spanish dancing is just another way to paint that picture.

If you think of your dance partner in those terms, instead of the old-fashioned “he leads, she follows” routine, both of you will be thankful.  In the meantime guys, do yourselves a favor: get out and see some Spanish dancing.

Blood Wedding runs through April 23 at theater II at USF. It has two versions: Spanish and English.

My experience swing dancing at USF: “Would you like that slow, fast, or bouncy?”

They say you will always remember your first dance. I’d rather forget mine.  Let’s just say that instead of looking like John Travolta, I more accurately resembled a pig on roller skates. Hey wait a minute—I was on roller skates (it was 30 years ago, and I worked at a skating rink).

Yet I went one to win two state championships in 1989, and trained for seventeen years to finally win a grand championship in dancing. Would I do it all over again? You bet! Because there’s nothing like tripping the light fantastic.

That’s why I whenever I get an invite to dust off my dance shoes, I never turn it down.  I’ve sworn myself to the dance gods to forever give thanks. So on March 26, I joined the Swinging Bulls for part three of their Spring Swing Series held at the University of South Florida’s Marshall Center.

END_OF_DOCUMENT_TOKEN_TO_BE_REPLACED

Students say no to fried twinkies and yes to tango

About 100 University of South Florida students participated in the Florida State Fair Dancesport Festival held Sunday, Feb. 21.  Among those that skipped-out on the fried twinkies and chose to dance instead were Robin Mansour, 20 and Daniel Ariew, 20.  The result was a third place finish in the American Tango, open bronze division.

“We were so surprised,” said Mansour.  “Daniel’s forte is swing, not tango. It just goes to show, you never know!”

Some students came to compete, while others like Mina Hanna came for the social aspect.

“I just started dancing, so I just came for the fun,” said Hanna.

He had good company. ﻿ ﻿The competition’s organizer, Debra Loran, said over 200 students showed up for this year’s event﻿ to compete in the waltz, tango, fox-trot, swing, rumba, cha-cha, and salsa.

According to Loran not everyone competed–some opting to participate for fun.

“This event gave me so much pleasure to see so many students go out there with little or no confidence in what they were about to do. Then they turned it around and had the time of their lives,” said Loran. “The energy in the room was totally electric.”

Loran orchestrates the event every year, and according to State Fair officials, this year’s was exceptional.  When she’s not organizing ballroom dance competitions, Loran teaches three dance classes at the USF recreation center on Mondays and Wednesdays. Each class counts as two PE credits.

At 12:55 p.m. she teaches ballroom in room 005 downstairs. At 2 p.m. she teaches swing, and at 3:05 p.m. salsa. Both of those are considered American rhythm dances, and they are taught in room 107 upstairs. And get this, No partner is neccesary!

Dancers will have to wait for a free Lei

Students expecting a free lei will have to wait until next month to get one.

The USF’s Ballroom Dance Club has rescheduled its Luau Dance Party at the Marshall Center for April 9.

According to the club’s president, Matt Dunton, the dance that was originally scheduled for March 5 encountered scheduling conflicts with the center. He and the club’s seven other officers elected to move the date to next month. 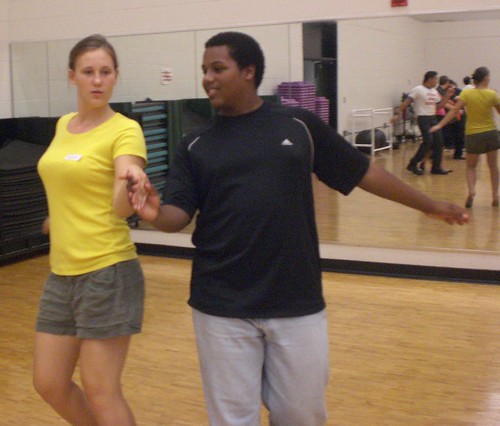 “This will be our big theme dance-party of the spring semester,” said Dunton.  Last semester we had about 78 students show up for our Halloween theme dance, and it was a great success. We are expecting just as many if not more for this event.”

The USF Ballroom Dance Club was formed in the Spring of 2009.  They hold beginner and intermediate classes every Saturday from 2 p.m. to 5 p.m. in the USF recreation center room 005 that is free for USF students.

If you’re not a student, don’t sweat it. The cheapest cha cha in town is only 5 dollars. The class format rotates between the smooth and rhythm ballroom dances. The smooth dances include the waltz, foxtrot, tango, and Vienese waltz.  And if rhythm dancing is your thing, the rumba, swing, mambo, and cha cha are there to fill the void.

“More and more people are finding out about us,”said Dunton. “For students, we’re the only free ballroom dance club on campus. Our facebook page now has over four hundred members.”

You don’t have to be a member to attend the BDC’s classes or parties, but students that want to check them out should visit their web site at http://ballroomdanceclub.yolasite.com/ or visit the club’s Facebook page.