ilykeschloé has written 2 posts for The Digital Bullpen 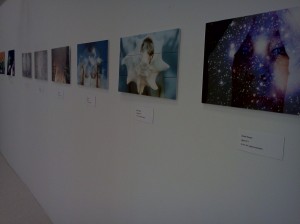 For the first time, Kristen Prosen, a senior English and studio art major, publicized her works in “Finding Yourself Right Where You Stand.”

Prosen compared the feeling of hosting her debut show to what she imagines having a baby would be like.

“It’s a hard, painful process and in the moment that’s all you can think of, but eventually that pain goes away, you can relax and be satisfied and then you’re ready to have another,” she said.

Before set up, Prosen knew exactly how she wanted it to look but was skeptical of executing her vision.

Her labor pains began while filling the spacious white walls of the Oliver Gallery two Saturday’s ago. The confines of a proper presentation; a straight line of evenly spaced work, precisely 60 inches from the ground; were constricting.

Even though her exhibit was mostly set-up by Monday, Prosen frequently returned to the Oliver Gallery making several changes in an attempt to portray her vision accurately.

“I didn’t like the way the lighting was set-up so I built a track lighting system to space the light on each piece more evenly,” Prosen said.

At the closing reception held last Friday, Prosen’s ideal gallery set-up was completed. Scents of Nag-champa, her favorite incense, filled the room, guests ate the catered food and the lighting illuminated her work just right — her essence controlled the entire space as she performed seven pieces and a poem.

Prosen admitted she made a mistake during her live performance but continued on fluidly and no one seemed to notice.

“[Prosen's] music is great; it has this folksy confessional outlook,” she said. “Her lyrics are refreshingly honest about small nuances in life that people don’t usually think to describe.”

Prosen estimated that she spent 10 to 15 hours putting everything together and after the final reception, it only took about two hours to take down.

“It was a huge process but it all happened so fast. Now, I’m like what was that for, now I don’t know what’s next,” she said. “Being in charge of this whole process was overwhelming, it sort of felt like I was parading my accomplishments.” 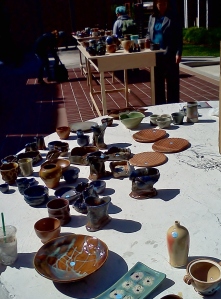 Hand-made ceramics on display and for sale in the art department courtyard February 13- 15.

Lil Muddy’s Fun Bunch, a USF ceramics club, is hosting its annual art and pottery spring sale this week (from Feb. 13-15). The club is selling its work in the art department courtyard.

Vases, cups, sushi plates, bowls and brush holders stretch across three tables. The eclectic gathering of shapes, colors and styles from one piece to another is as varied as the crowd of more than 15 students and faculty browsing and buying. Even though the handmade ceramics are all original works, they’re priced very reasonably, ranging from $5 to $20.

David Waterman, head of security for the Contemporary Arts Museum, bought a $5 piece on his lunch break.

“I don’t have more cash or I would buy more,” Waterman said. “It’s beautiful stuff. I look for it every time it comes around.”

Lil Muddy’s Fun Bunch consists of about 20 students who meet on Fridays to learn, teach, sculpt and experiment with clay. Money raised from the three-day pottery sale will be going toward a club member’s trip to the National Council on Education for the Ceramic Arts Conference, which is hosted in Seattle during the last weekend in March.

The number of attendees who receive a financed trip is limited to the earnings the club makes during each of these sales. Daniela Mora, a junior majoring in studio art, attended the conference last year and is the club’s vice president.

“The club members with the most points receive the funding,” Mora said. “Members gain points from cashiering at these events, attending meetings and making guide books on firing and glazing pottery.”

Christina Pena, also a junior majoring in studio art, was earning Lil Muddy’s points today for watching over sales. After each purchase is made, Pena  takes the price marker off the ceramic and places it on a student’s card. By 2 p.m., less than three hours into the sale, Pena tells Mora that her rainbow glazed work had sold more than anyone else’s.