Nick is a senior mass communications student at the University of South Florida. He is currently the Sports Director of Bulls Radio.
nflammia has written 8 posts for The Digital Bullpen

AUDIO: Bulls Experience a Day in the Big Leagues

On Friday, the University of South Florida baseball team played an exhibition game against the New York Yankees. The game was a unique opportunity for the Bulls to face a Major League Baseball team. The Yankees defeated the Bulls 11-0. The experience, though, will never be forgotten by the USF players and head coach Lelo Prado. Click here to hear the audio story:

The University of South Florida renamed its Athletics Center the “Lee Roy Selmon Athletics Center.” A ceremony was held as the new name was unveiled right before the rain fell, last Wednesday night. Many shared their stories of Selmon, including USF President Judy Genshaft. Selmon’s wife and four children were in attendance, as well. Click here to hear the audio story:

AUDIO: Despite strong pitching performance, USF falls to No. 2 UF.

On Sunday, the University of South Florida Softball team faced a tough challenge as No. 2 ranked University of Florida visited the USF Softball Stadium. Sophomore pitcher Sara Nevins started for the Bulls and pitched into extra innings against the Gators.  Ultimately, USF fell to the Gators 3-2 in eight innings. Click here to hear the story:

The softball team is preparing for the 2012 season. The Big East coaches’ poll predicts the Bulls will finish fifth in the conference. Nine new players have been added to the roster. Coach Ken Eriksen gives his thoughts on the upcoming season and discusses one key player addition to the team. Click here to hear the audio story:

The Fashion Phenomenon of Jeggings 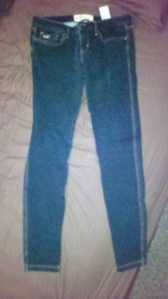 TAMPA – They are popping up everywhere. You can find them on college campuses, at night clubs and even Hollywood red carpets. What, though, is so fascinating about this new, rather uncomfortably tight looking, wardrobe item? The topic of discussion, of course, is the new fashion trend known as “jeggings.”

The idea has been soaring in popularity, as of late. In fact, Oxford Dictionaries now considers “jeggings” a word. Member of the US Dictionary Publishing team Grace Labatt reported in February that “Jeggings is a new addition to the dictionary.”

So what exactly is a jegging, you may ask? You may notice that the word is similar to the common fashion piece known as leggings. However, the “j” replacing the “l” refers to a unique addition to those tight-fitting, stretchy pants. Referring to a denim look, the “j” is the first letter of the word “jeans.” Combine that with leggings and you get the phenomenon known as jeggings.

The popularity of jeggings began rising last fall, however the trend is still everywhere to be seen. University of South Florida student Ashley Custodio said, “They are a combination of like jeans and leggings at the same time. So it’s like the best of both worlds.”

Made from a stretchy elastic material, like Spandex, along with a hint of denim, women seem to have come to a consensus that jeggings are much more comfortable than actual jeans. They give the look of a tight fitting jean. However, unlike normal jeans, jeggings conform to the body of the person wearing them. In fact, because of their lighter material, jeggings have become something common to wear year-round. USF student and Victoria’s Secret sales associate Blair Morris said, “Well, I like to wear skinny jeans. But during the summer, jeggings are a more comfortable alternative…they are pretty popular.”

Jeggings are being worn by women of all ages, shapes and sizes, from elementary school girls to older women. “My 11-year-old sister has a pair of jeggings…and everyone in college is wearing jeggings, too,” said Custodio. Since they are stretchable, jeggings are in the plus-size department, as well. In a blog on Plus Model Magazine’s website, Madeline Figueroa-Jones said, “…the elastic waist is better for smoothness for those of us with a fuller mid-section.”

However, it seems that jeggings aren’t restricted to just the ladies. In an episode of the TBS show Conan, Conan O’ Brien had Project Runway fashion expert Tim Gunn on his show. The two discussed the idea of wearing skinny jeans and jeggings. “Ohh, they’re out there, let me tell you,” said Gunn in response to O’Brien’s claim that men do not wear jeggings. In fact, there are several online fashion blogs, including a post by Leah Chernikoff on Fashionista.com, that have given male leggings and jeggings their own name…“meggings.” During the show following Gunn’s appearance, O’Brien wore a pair of jeggings.

Jeggings have been seen all over the Hollywood scene, as well. Rihanna, Jessica Alba, Kate Bosworth and many other celebrities have all been seen wearing the “jean-legging hybrid,” as reported by ABC News’ Good Morning America.

There are a wide variety of jeggings available for purchase. Some of them include the regular jean attributes of belt loops, side and front pockets, while others may just give off the appearance and not actually have the normal features. Jeggings also do not all have zippers and/or buttons. Some forms are just pull-ups like the normal legging; however some include the zippers and buttons to give off the full jean look.

Since jeggings are a lot like jeans, women have a variety of outfit possibilities in which they could use them. Morris said, “Jeggings go with almost anything. They can go with flats, heels…pretty much any shoe. But I love to wear them with boots.”

Jeggings also, just like jeans, range in color selection. They are available in lighter to darker shades (or washes) of colors. They are also available in the torn jean look that normal jeans sometimes have around the part of the jeans where the knees bend.

Price is also a wide range when it comes to jeggings. They can be found for as low as $12 on walmart.com. Hollister has them for sale for as much as $49.50. Jeggings can be found at stores such as Gap, Old Navy, JC Penny’s, Kohl’s and almost any department store that carries women’s clothing.

As Good Morning America host Robin Roberts puts it, “(Jeggings) are the hottest fashion trend going. Everyone seems to be wearing them.”

TAMPA – The University of South Florida Bulls’ senior outfielder and pitcher, Junior Carlin, has extended his hitting streak to 16 games.

During the Bulls’ 5-2 win over Stetson University, Carlin sliced an opposite field double down the left field line to extend his streak.

Carlin’s streak is the longest in his college career and the longest by a USF Bull since Ryan Lockwood’s 32 game hit streak in 2008.

During the streak, Carlin was batting .327. Only two of the 16 games include a multi-hit performance from the senior, both coming in the series win against Rutgers University on April 8-11. Carlin had five hits in that series.

USF Loses Key Pitcher for Remainder of the Season 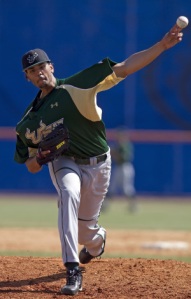 TAMPA – The University of South Florida Bulls baseball team will be missing one of their key players for the remainder of the 2011 season. Senior left-handed pitcher Andrew Barbosa has undergone “Tommy John” surgery on his pitching arm on Thursday.

Due to the injury, the Big East Conference has granted Barbosa a sixth year of eligibility, according to USF Athletics. Barbosa made two starts before leaving a game early on February 26th when the Bulls hosted Elon University.

USF Athletics reported that Barbosa left the game due to tightness in his left forearm. However, after further testing revealed ligament damage, the preseason All-Big East Conference selection required surgery.

Pitching in the second spot in the Bulls pitching rotation, behind senior right-handed pitcher Randy Fontanez, Barbosa had played in two games this season, finishing with a 1-1 record. “Bobo,” as his teammates call him, recorded an earned run average of 0.90 while tallying 13 strikeouts.

“(The injury) was a big blow because Andrew was pitching great. He was on his way to having a great year,” said Coach Prado. Prado also added that Barbosa would have been a possible high draft pick in the 2011 major league draft.

Barbosa had been drafted in last year’s MLB draft in the 15th round by the San Francisco Giants, but opted to come back and pitch in his senior year at USF. Junior left-handed pitcher Matt Reed is the likely candidate to replace Barbosa as second in the rotation.  Reed has pitched well thus far, highlighted by a seven inning outing against the University of Miami where he allowed one run.

Freshman Nick Gonzalez is likely to pitch third in the rotation. The Bulls currently own a record of 10-13 (1-1). They will play a rubber match in Tampa against West Virginia University on Sunday before playing a non-conference game against North Florida in Jacksonville on Wednesday.

The University of South Florida Bulls baseball team brought home a come-from-behind victory against University of Central Florida in Orlando on Tuesday night.

Junior pitcher, Matt Reed, got the start for USF. He pitched after going six innings and giving up three earned runs.  Reed left the game with UCF winning 3-0, but USF’s offense heated up in the late innings. After scoring two runs in the seventh inning, USF turned in a four-run eighth inning to take the lead. The offensive hero for the Bulls was sophomore Jimmy Falla who came into the game as a pinch hitter in the seventh inning and ended the night with two hits and four RBIs. Senior Kevin Quackenbush pitched the ninth inning for the Bulls and earned his third save of the season.

This was an important win for the Bulls, who came into the game winning just one of their last five games.  Not only was it their first time winning a road game this season, but it was an added bonus to win against a long time rival.  USF now has a 57-51 record all-time against UCF.

The comeback victory gives the Bulls even more confidence in their offense as they approach Big East Conference games, which will begin when the Bulls welcome West Virginia for a three-game series on March 25-27.

The Bulls will play four straight games against Bethune-Cookman on March 17-20, with the first two games played at Daytona, while the final two will be played in Tampa.