Atecia Robinson has written 6 posts for The Digital Bullpen

Christopher Cano, a student government presidential candidate, and Roman McCreary, his running mate for vice president, were spotted around campus meeting and greeting students hoping to gain votes for this week’s upcoming election. Their aim is to maximize and enhance the overall student experience and provide opportunities for students to get involved on campus and within the community, but we bet there are some things students don’t know about them. Here are the five top things you probably don’t know, plus a bonus five the Digital Bullpen found out:

1. Cano proposed to McCreary that they run as a team, being that McCreary is one of the people Cano trusts most and they have a close relationship. Cano has been dating McCreary’s sister for the past few years, and he and McCreary will be brothers-in-law soon.

2. Cano prides himself on being a great family man.  Two of his best friends are his parents. When he graduated with his bachelor’s at age 20., he went on a cruise to the Caribbean with his parents. It is one of his fondest memories. They ended up getting him drunk. He was sick for the rest of the night and the next day. Cano is 28-years-old and has not drank alcohol since.

3. Cano is a first generation college student who is currently finishing his Master’s in Public Administration. He hopes to graduate and become a Tampa city manager or budget director. His favorite class is public budgeting. He is working on a project to improve the budget for Temple Terrace. Cano also said he is working on becoming president before he turns 50.

4. Cano’s last name isn’t really pronounced Caan-ow as most people think, it’s Kane-ow, and he anglicizes it to make other people feel more comfortable. His middle name is Carlos.

5. When Cano is not busy working, he loves listening to music and having fun. He went to his first concert during the summer of 2011 to see Sade, one of his favorite artists. He also enjoys eating out at PJ’s Oyster Bar near Indian Rocks beach, where his favorite dish is the “gaitor tail.”

6. McCreary is a devoted Christian. His mother is a pastor who has aided in his religious upbringing. He does a lot of philanthropic work with groups such as Chi Alpha Christian Fellowship on campus and the Red Cross Armed Forces. One of the best memories he has thus far was passing out sandwiches and hot chocolate to the homeless.

7. February marks McCreary’s third month living as a civilian. He joined the U.S. Army three years ago as a 68-Whiskey combat medic, and was honorably discharged due to an injury. During the course of training he sustained two hernias, which he concealed from his bunk mates and other officers. He says he would, “just push them back in.” When he finally decided to see a doctor about the issue, three additional hernias were found.

8. McCreary is a military brat who has lived all over the world. He was born in Germany. Though English is his first language, he speaks German as well as Spanish and French.

9. McCreary is currently majoring in sociology and hopes to return to the U.S. Army as a medical officer after he graduates.

10. McCreary is apart of Zeta Beta Tao. Sometimes he is faced with going along with the group or staying true to his Christian values, but he feels he is respected for doing what he believes in. Before joining the fraternity he thought of fraternities and sororities as they are sometimes stereotyped. Later when attending a party he realized he had many similarities with them, and many of those in the Zeta Beta Tao fraternity were already good friends of his, which was his reason for joining.

Voting day starts today (Monday, Feb. 27), and whether they win or not, Cano and McCreary said they hope the entire student body votes and has their voices heard.

Students at the University of South Florida have gotten the knack of putting together their green and gold colors for athletic events, but what about their ability to stay fashionable in cold weather? What may be the last cold blast of air hit Tampa and the campus two weeks ago, giving students at least one more chance to trot out their fashionable winter wear.

There were no fur flurries, but a pair of old school Doc Martens were too cool for comfort. Even a great pair of accessories can add spice to an outfit fit for the outdoors. Some students cling to their favorite designer satchel for heat. Cole Haan was one of the brands. It’s not a pair of gloves, but who says you can’t cling to it for warmth. We wandered campus and here is what we found:

We also came up with a few links to where you can find the student’s cool threads.

Nick Trobiano, a senior studying magazine journalism, who loves Cole Haan in any type of weather, was wearing:

Hannah Liu, a Master’s of Library and Information Science student, who layers her clothing for a warm but not bulky effect was wearing:

Meeghan Gilchrist, a mass communication major, who likes to extend the life of her wardrobe with bright colored stockings was wearing:

Geneviev Godcharles, who majors in art history, was wearing:

On the Way past the theatre I buildings and Beef O’ Brady’s we spotted Neelam Harinandonsingh and thought she looked quite comfortable sitting on a golf cart. She said she likes to keep things simple for school. Her boots are lined to keep her feet cozy.

It’s only a matter of time before the temperature hikes back up to the sweltering heat USF students are used to. That being said, we hope we’ve provided you with ways to stay warm and accessorize for those with deep pockets, and those whose are more shallow.

Spurred by the need for natural gas, geological engineers are debating a hydraulic fracking technique that pollutes vast amounts of water when freeing natural gas from rocks.

“Oil and natural gas occur in sedimentary rocks that have pores in them,” said Mark Stewart, a professor of hydrogeology at the University of South Florida. “In some rocks, the pores have low permeability, which means the pores are small and restricted. Hydraulic fracturing creates larger pore space so gas can travel to wells.”

According to the Safe Water Drinking Foundation, current hydraulic fracturing techniques use millions of liters of water that can lower groundwater levels and reduce pressure levels in nearby aquifers. This can allow methane gas to create gas bubbles that seep into shallow bodies of water or household pipes, which can be dangerous and poisonous to people.

Because natural gas can be a scarce commodity that has damaging environmental factors, other ways of obtaining it were pioneered in Canada for use in states such as Pennsylvania. The company GasFrac wants to use propane gas instead of hydraulic fracturing, which uses water, said Stewart.

Nowadays, natural gas and oil reserves are developed in very low permeability sediments, which would not have been done before when oil and gas was readily available. Stewart said, when creating these reserves, billions of gallons of water are used and injected into the rocks to break them up at high pressure, which leaves polluted water on the ground surface during the process.

Helen Delano, a geological engineer at the Pennsylvania Geological Survey, said in a phone interview on November 15 that water used in hydraulic fracturing damages the environment because it contains salts, chemicals and other environmentally damaging wastes.

“That’s where the debate over fracking comes from in our state,” Delano said.  ”Is it worth the risk? As I said, it’s still being debated.”

In January 2011, GasFrac published a flowback guide saying the reusable HD5 propane they use will turn into a vapor that will return to the ground surface for collection.

Jack Hutchings, a geology master’s student at USF, said using gas could allow natural resources to be recycled and reduce the cost to consumers.

“Using water currently is a high cost to the industry to dispose of the contaminated water. Since most drilling companies are exempted from taking adequate safeguards due to laws passed in 2004, they don’t do it,” said Stewart.

The Environmental Protection Agency announced in June 2011 that it would conduct case studies in five states for evidence of water contamination from June 2011 through 2012. 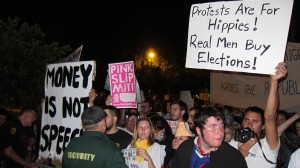 The Republican presidential debate at USF was crucial for the four GOP candidates, but many groups oppose their agenda. Hundreds flooded the campus to fight back against the positions of candidates on immigration, LGBT issues and tuition hikes. Here is our audio report:

Chelsea Brady, a senior at the University of South Florida in Tampa and non-degree seeking student, Kyle Stoper, are planning on adding a new work-out routine to their schedule.

Brady started working out a few weeks ago in the newly renovated recreation center that added 70 pieces of cardio equipment. The size of the center was also increased from 7,000 square feet to 21,000 square feet.

“I used to pay for a gym membership at my YMCA. The old one wasn’t the best. Now I have everything I need so I canceled my old one,” said Stoper.

Water on decline, hydrogeology on the rise

Spurred by expected job growth and the need for groundwater­ from Florida’s aquifers, geologists increasingly are choosing hydrology as their specialized field of study.

According to the Bureau of Labor Statistics, demand for hydrologists is expected to grow nearly two percent annually, or 18 percent over 10 years, which is a faster-than-average rate for all occupations.

Because water is becoming a scarce commodity globally, hydrogeologists are needed as the population expands.

“In the last six years population in southwest Florida increased by 900 people per day,” said Rodney Dehan, the senior research scientist and administrator of hydrology at the Florida Geological Survey, in a phone interview.

Many hydrogeologists enter the field with a civil engineering background, which is common at the University of South Florida. Dr. Jeff Ryan, the chair of USF’s geology department, said that a handful of schools across America have hydrology programs, which makes it a popular area of study.

“About 33 of our Ph.D and master’s students are focusing on hydrology,” Ryan said.

Since 1970, when the National Environmental Policy Act was passed to increase the practice of environmental assessment, hydrogeologists’ work was focused on water quality.

“In Florida over 90 percent of our drinking water comes from groundwater aquifers that serves for irrigation of agricultural fields, running power plants, mining activities and using phosphate as fertilizer,” Dehan said.

He also said that since 1940, Florida’s population has increased from 4 million to 19 million people.

“Development of land prevents the recharge of aquifers through rainwater, which is why hydrogeologists are needed,” Dehan said.

When people use water they create waste. Hydrogeologists make sure water is properly treated and discharged.

Hydrogeologists must also measure the amount of drinkable water an aquifer can create. Within the last 15 to 20 years, technology has changed the nature of hydrogeology field work and helped hydrogeologists determine how much water is moving upstream or downstream toward an aquifer, Dehan said.

Working in a beautiful environment is a major reason for career choice, according to a recent informal poll of 13 USF hydrogeology students.

Hillary Flower, a Ph.D student with a master’s degree in geology said, “One of the reasons I decided to pursue hydrology was because of my research in the Everglades.”

The Bureau of Labor Statistics said the federal government employs 27 percent of hydrogeologists. Twenty-six percent are employed in architectural, engineering and related services. Another 19 percent work for management, scientific and technical consulting services.

Employment is expected to increase by 7,400 between now and 2018, according to the Bureau of Labor Statistics.

The median annual wages for environmental geologists was $79,160 in May 2008.