Paul Lockwood has written 5 posts for The Digital Bullpen

The creepy ghoulish creatures known as zombies rose from humble beginnings to become one of society’s favorite monsters.

In recent years, the culture surrounding zombies has expanded beyond its movie monster status. It has evolved into a booming industry involving merchandise, video games, television shows, best-selling books, charity walks and even human vs. zombie games that schools like University of South Florida host all over the country. These games draw hundreds of participators into the mock battle of humans trying to slay the flesh eating creatures before they are turned into a zombie themselves.

How did an undead creature surpass its cult classic begins to engrain itself as a pop culture beast it is today?

It’s best to start at the beginning of the modern day zombie created by George A. Romero in his well-known classic “Night of the Living Dead”. Originally, zombies had ties to Haitian and voodoo culture with zombies being an undead controlled by a master. Romero created the pandemic zombie that staggers around moaning for flesh, and that is the zombie that pop culture has embraced today.

Alan Green, part of USF’s English department PhD program, teaches film study and is currently working on his dissertation that focuses on the human/zombie dichotomy. “Whether they are fast or slow zombies they sort of mirror us as a society,” Green said.

Green explained that one of the reasons they are so popular is they are relatable. Zombies exploit our fears at the time, whether they represent post 9/11 terrorist fears in “Land of the dead” or our consumer culture dystopia in “Dawn of the Dead”. “They’ve tapped into the human psyche,” Green said. He added, “Zombies are highly malleable; they change for each new wave of successive fears and anxieties to reflect society.”

One student, Rob Fowler, says his love of zombies comes from the idea zombies would bring an equality to society. “It’s not just about shooting your neighbor. There would be no more rich or poor, just those who survive and those who don’t,” Fowler said, “It would be a world with a level playing field as opposed to right now, where it feels like everything’s an uphill battle.”

Green also noted the more Darwinian aspect of a zombie pandemic that Fowler was alluding to.

Even examining zombies on just a monetary level the popularity trend is clear. The 2009 film “Zombieland” grossed more in its first weekend (almost $25 million) than the first three “of the dead” films total box office grosses put together. They were of course in a different generation. “Zombieland” is currently the highest grossing zombie film of all time.

There is something to be said, however, of the recent films unprecedented ability to draw people to the theater for a zombie film. These less serious zombie films like “Shaun of the Dead” and “Zombieland” have been hugely successful at the box office and in DVD sales.

Their success, as well as AMC’s television show’s successful adaptation of the graphic novel “The Walking Dead”, may have been a contributor to why cities across the country host zombie walks, why it’s one of the most popular Halloween costumes or why school campuses have large scale zombie battles.

University of South Florida’s game was originally organized by the religious group Christians in Action, but one of the recent administrators of the game, Zachary Cornett, says they were not affiliated with the last one. He says they are going to meet with CIA to see who will run fall’s game which will hopefully run for a whole week. The game itself draws hundreds of students to play the campus wide game.

Charlie Brandt, USF student, says he already can’t wait to sign up for the fall game. “I’ve loved zombies for years, and read Max Brooks’ books, but it seems like the games come and go too quick each semester,” said Brandt. He says he missed the last one because it was a weekend game, and he had to work.

While the zombie popularity trend will probably continue for some time because, as Alan Green said, “It’s pretty much touched every facet of our culture.” He warns most horror subgenres like zombies or vampires go though phases of ups and downs. He said even if it begins to fade a little in coming years, he would expect it to make a comeback eventually.

Regardless of how zombies fare in the future, they are riding high now. Around campus you can see T-shirts and bumper stickers. In the rest of the world, it’s hard to avoid zombies as studios continue to produce movies like “World War Z” and “Zombieland 2” that are coming in the near future, and the second season of “The Walking Dead” looks to be coming out next fall. There is just something about these undead creatures that our society just can’t get enough of.

The final days of spring semester at the University of South Florida are drawing to a close but there is still time to make a trip to the arts department for some last shows.

The highlight this week is at the William and Nancy Oliver Gallery as it highlights some USF photography students such as Ryan Stone, Caroline Uhl and Amy Royale. The gallery itself is not immense, so it’s good for a break from that last minute studying for finals. The reception for the event will be held Friday at 7p.m., but during the week the gallery is open 11a.m.-3 p.m.
The exhibit will change each of the following weeks until the semester is over, and will keep the same hours of operation. For photography lovers, however, this is the week to go to see what other students have done.
There is also still the Starting Fires exhibit that is being held in the Contemporary Art Museum that is close to the Oliver Gallery. Staff at CAM wants to remind visitors not to touch the art though it maybe very tempting. There are pendulums to swing and toy-like models, but it is there for aesthetic appeal only.
One of the other galleries to visit is the Centre Gallery in the Marshall Center which is featuring DigiMazing by Scott Draft, Samuel Bishop, Adrian Errico and Lindsay Scroggins. This is also a smaller gallery run by USF, so if you’re short on time these last weeks of school and just wanted a break from all the hard work.
Find the galleries sites by accessing the main arts website at:

“I really don’t know how I came up with it all,” said Ellen Mueller after a reading of her art project for the Starting Fires exhibit now at the University of South Florida.

Mueller compiled artwork she started working on last June thru this semester into a book and video narrative being shown along with other projects at the Master of Fine Arts graduation exhibit at USF’s Contemporary Art Museum. The book is filled with colorful images of time machines, dreamscapes and telepathic aliens. Mueller will be reading from her book the next two Fridays at noon while dressed as characters from her book.
The free gallery is showcasing Mueller’s and other master’s degree candidate’s artwork and Mueller’s Monday to Friday 10a.m.–5p.m., and Saturday 1p.m.–4p.m. The show is displaying a variety of mediums from oil paintings by Ryan Foster to ceramics by Zak Hemsteger and other projects by nine different MFA students including Mueller.

Mueller went about developing her project by sitting in a room with a large sheet of paper on the wall with only a few ideas of places and characters. “After I started to get more and more pictures on the wall, I realized this had to be a book,” said Mueller. Then after a lot of rearranging and work Mueller was able to make her deep and detailed artwork narrative.
The students’ hard work and effort is evident in the work they produced. The exhibit runs through May 7.

The University of South Florida’s ArtHouse show hits the campus again and this year looks to be bigger than ever thanks to the National Council on Education for the Ceramic Arts’ visit to the bay area.

NCECA annually visits areas around the country to showcase artwork. According to USF faculty Deon Blackwell, NCECA will have 106 shows around the Tampa and St. Petersburg area. It is the first time they have ever come to Tampa.

This event is coinciding with one of the biggest weeks for USF’s fine arts, the 13th annual ArtHouse. This invites people around the Tampa community to come and see hundreds of works of art when studios around campus open their doors.
While the shows around USF campus have already begun opening their doors for the show, the big event does not happen until Friday night. Blackwell, who helps organize the event, says Friday night will be the ArtHouse party sponsored by the local Yuengling brewery. “I haven’t slept in three days,” said Blackwell. “It’s exciting but I’ll be happy when it’s over and I can get some rest.”
The party will feature live music, food and drink, and most importantly art from around the country, as well as many exhibitions from students and faculty. Blackwell says the night usually draws a few thousand, but with NCECA in town they expect it to be the largest ArtHouse ever, drawing up to 3,000-4,000 people.
For anyone looking for something exciting to do on this Friday night, this is the event to go to. Best of all it’s free to attend. So come see the exhibits and listen to live music. The event kicks off at 8 p.m. at the FAH building (if you don’t know where that is, it’s not too far from the water tower and Marshall center on campus). 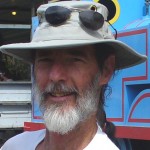 While many students were already attempting to get the most out of their spring break, Ed Ross, the founder of Community Stepping Stones, was at his art show at the William and Nancy Oliver Gallery at the University of South Florida.

The showing on March 11 was not about Ross, instead it was about the Sulphur Springs community he represents. Community Stepping Stones is a not for profit organization Ross developed to help redevelop the community he loved.

“I’ve been in Tampa since the 60′s, so I saw firsthand the decline of the [Sulphur Springs] area,” Ross said. Over the years Ross saw people forced from their houses into rentals, and with it the community became more impoverished and less educated.

Ross works to improve the community starting with the children. He teaches art and gets the kids interested in community service in order to give them the life skills needed for school and beyond. He said in his community, which is just north of downtown Tampa, children are more likely to dropout of high school than graduate.

To him this statistic can be lowered. Ross said the proof of his program is their oldest member, Lakeena Matthew, who is now graduating from college. He says girls like her may have never had the chance to make it that far if she wasn’t supported in her community.

The show displayed artwork from some of the youngest members up to one of Matthew’s pieces. In response to the poor attendance due to spring break, Ross said, “This was not about getting a big turnout, it’s always been about the children.”

He said the impact of these children getting to see their artwork displayed at a university is huge. He hopes it inspires the kids to one day go to a university like USF rather than be just another dropout statistic.