kamedina has written 2 posts for The Digital Bullpen

In the first floor’s studio of the University of South Florida’s architecture building, smoke is coming from a massive table where a laser cutter is accomplishing what many architects find hard to do.

The laser cutter is able to create the tiniest cuts that would be nearly impossible to make by hand. Cutting through wood, paper, steel, plastic and a number of other materials, it has found a home in USF’s architecture department but will soon become one of many for the student’s to use.

Mark Weston, a professor of architecture, received the grant to purchase more cutting machines for the school.

“The idea behind the grant was to maximize output of cutting because our current laser cutter is completely over burdened,” he said. “It runs 24/7 and it’s a very productive tool. So we need more of them, not just for architecture, but for the whole school.”

The cost of a laser cutter can be anywhere between 1,500 to 50,000 dollars while USF’s machine was only about 5,000 dollars because it had been used at another school.

A machine like this can last for many years, however, students use it so much that it becomes quickly over worked.

Architecture student Daniel Houghton says that the problem is not actually the machine but the program they use instead: “When you get into layering, like lots and lots of pieces, and you draw it on the computer, it can get kind of confusing.”

Auto-CAD is the architectural and engineering computer program that allows the students to construct 2-D examples first, which the laser later cuts.

This industrial machine has played a useful part in producing student’s finished models, but the only ones who can use them are those in their second year. They first undergo an orientation to explain the functions of the laser cutter, and then have unlimited access to machine for a fee of $4.00 every 10 minutes.

The laser cutter can mass produce pieces, however, students would rather draw out designs themselves and then incorporate the laser cutter to create specific pieces for their completed models. The machine is meant to be used more as a production tool than an actual design tool.

Tommy Keung, a second year architecture student, has enjoyed being able to use the laser cutter.

“The laser cutter has tremendously expanded the possibilities of model making. It allows for extreme detailing, precision as well as tectonic thought,” said Keung. “It also allows for endless possibilities.” 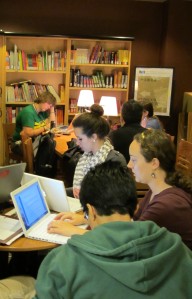 USF students studying before finals at the Library's Starbucks