Kirsten Karbach has written 6 posts for The Digital Bullpen

Freshman right-hander Devin Smith made just his second appearance in a Bulls uniform on Friday afternoon – and it came against the New York Yankees. The Bulls had a unique chance to square off against their big-league counterparts in a Spring Training exhibition at George M. Steinbrenner Field. Smith shared his thoughts on the outing, including the opportunity to face Derek Jeter. Click here for the audio story:

USF Baseball head coach Lelo Prado elected to make a key defensive change, moving freshman Kyle Teaf in as the starting shortstop in place of a struggling Chad Taylor. Taylor had committed six errors in the Bulls’ first eight games, and moves back to his natural position of center field. Click here for the audio story:

The USF Softball team (3-1) defeated the University of Maine 8-1 on Friday to open the 2012 season, thanks in large part to freshman starting pitcher Sam Greiner. Greiner talks about her team’s efforts, and adjusting to collegiate hitters. Click here for the audio story:

Jasmine Wynne posted a game-high 19 points as the Bulls dropped the Pirates, 57-45.The Bulls trailed throughout the first half, in which they shot just 20 percent from the floor. Wynne’s 14 second-half points helped USF improve to 4-3 in the Big East Conference. Click here to hear the audio story:

Several USF Baseball players suffered a number of key injuries in 2011, leading to a disappointing ninth-place finish in the Big East. Among those injured was right-hander Ray Delphey, who had to sit out the entire season. Now Delphey and the Bulls look to recover as they embark on the 2012 season. Click here to hear the audio story: 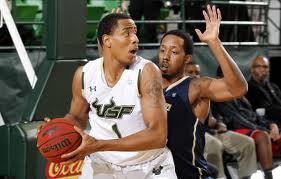 Coming off a 20-point loss to Marquette, the USF men’s basketball team rebounded to squeeze past the Providence Friars 81-78 at the Tampa Bay Times Forum. The Bulls limited turnovers and stepped up their offensive game, boosting their conference record to 6-3.