Rebekah Wright has written 2 posts for The Digital Bullpen

Students have trouble getting accepted into the College of Nursing

Every year many students apply to the University of South Florida’s College of Nursing with the hopes of being accepted and getting a nursing degree, but many of them are turned down and told to reapply the following semester.

The USF College of Nursing has limited room for students. Commonly, there are hundreds of applicants and only 36 spots available.

Kelly Seavey, a nursing student, tried to get her bachelor’s degree at USF a few years ago but was not accepted. “I looked at a couple private universities, but the price and prerequisites were outrageous, so instead I waited for about a year and was accepted to Hillsborough Community College,” said Seavey. She earned an RN associate degree at HCC and then transferred to USF.

Joylynn Grier, an undergraduate advisor for the College of Nursing, said, “Being accepted into the program is not all about GPA. Sixty percent is academic and 40 percent is writing samples.” Applicants’ grade point averages may be sufficient, however, if the writing samples do not meet the admission requirements, they may not be accepted.

Most public universities have the same problem as USF. The University of Florida’s College of Nursing website encourages students to seek admission into other nursing programs as well as its own. Students try to get into public schools first to get their RN because it is cheaper than private schools, and they can get a four-year degree at one school.

According to The National Institutes of Health’s national research ranking, in 2010 USF ranked 30th among nursing schools nationwide in NIH funding. They were ranked in 66th place during the previous year.

Melanie Nucis, a senior at Galen University, was not accepted to USF. Nucis instead opted to attend a private university where she paid a lot more money. “I really wanted to attend USF, but I just couldn’t wait and keep applying for the program. Galen had open spots, and so I went there instead,” said Nucis. “I’m glad that I chose this route, as much as I wanted to get into USF. I was able to get my degree at a fast pace, and I enjoyed the private school atmosphere.” 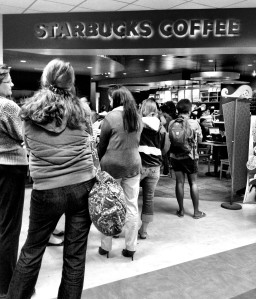 The line at Starbucks was unusually long today due to the temperature change, strong winds and constant rain. Students crowded around the lobby inside the library to escape the dreary weather outside. Although it was crowded, students sat with friends and made the best of the cold weather.