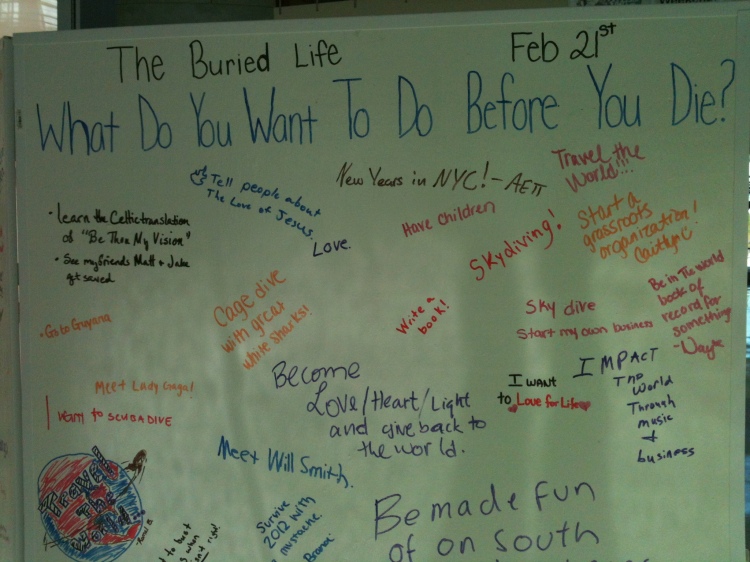 USF students were asked "What do you want to do before you die?" in preparation for a ULS event featuring The Buried Life, and these are some of their answers. Photo by Meghan Mangrum.

Ride a bull, swim with sharks, run a marathon, have sex with Chris Brown?

These are all on University of South Florida’s students’ “things to do before I die” list in advance of a visit from The Buried Life, a group of four men who set off to accomplish their list of “100 things to do before you die” who are coming to USF tonight (on Tuesday, Feb. 21.)

Here is a trailer for the show:

To prepare for the lecture, sponsored by the University Lecture Series (ULS), a whiteboard was set up in the Marshall Student Center two weeks ago and students were invited to add what they want to do before they die to it.

Some of the answers have been surprising: meet Lady Gaga, own a green crotch rocket and be made fun of on South Park.

“I want to release the zombie plague on the world,” said Wes Holloman, a junior. “I couldn’t think of something meaningful. There are so many things you can do. I wanted to put something funny.”

Someone wrote “shoot up a mall” on the board, but when ULS staff was notified, they erased it, said Megan Gallagher, a sophomore and ULS Hostess Director.

Generally, students are excited about The Buried Life’s lecture. The group was made popular by the MTV reality show of the same name.

“The Buried Life is really inspiring; they make you think that you can do what you say,” Gallagher said. Gallagher’s addition to the list: start a slow clap at an event.

Some student’s goals weren’t as silly as “burst into song when the moment isn’t right,” but were more personal and thought out.

Andrea, a junior, wrote “I want to love for life” on the board, with hearts around it. Andrea was diagnosed with diabetes at the age of 22.

“That opened my eyes that life is really short and you have to give your all,” Andrea said. “Love is a really important theme to me.”

Jordan Jackson, a sophomore, also wants to make a difference in someone’s life. On his bucket list is to post random compliments all over a city or all over campus.

“Someone could be having a bad day and they walk by and they see that and their day is changed,” said Jackson.

Silly or serious, students are interested in the project. One board is already filled. This week more will be of students to write on and they will then be displayed at the lecture.

“Everybody has things they really want to do, but maybe they are afraid to do try,” Jackson added. “Getting it out there is the first step.”