RSS feed for this section
This category contains 367 posts

Day in the Life: Green and Gold Guide ‘walks’ early

It is that time of the year again when many graduate to the next stage of their life. As University of South Florida prepares to bid farewell to its graduating batch, it also invites aspiring Bulls to have a look at the campus. Justin Mcnabb is one of many who will be “walking” at the graduation ceremony in May. But Mcnabb has his walk early. On Monday, April 23, 2012, he becomes the first Green and Gold Guide to walk a tour in his graduation gear, answering questions of youth who someday wish to do the same.

A large amount of land in Florida is in moderate to severe drought, but USF’s Tampa campus landscaping and irrigation was designed for minimal water usage and sustainability.

According to Kim Hutton, event coordinator for the USF Botanical Gardens, plants have been growing tremendously and there is a lot of “pizzaz” undeterred by the drought.

“The Bougainvillea on the [Tampa] campus thrives on abuse,” said Hutton. The drought-thriving plant can be spotted at the Martin Luther King Jr. Plaza.

Minimal rain and dryness throughout the sunshine state is due to the La Nina patterns, which brings drier and milder conditions. La Nina takes place when the sea surface temperatures across the equatorial central and eastern Pacific are below normal.

The winter season does call for multiple plants at the Botanical Gardens to be protected.

“During the winter, we must watch weather systems. Cold and freezing means we have to cover plants, bring plants in from the outside and turn heaters on,” said Laurie Walker, director of USF’s Botanical Gardens.

However, the native plants such as firebush, lantana, and milkweed can manage water and weather conditions without any covering, according to Florida Native Plant Nursery. The native plants are hardy and do not need attention.

“Here at the gardens we focus on using top dressing, which is mulch consisting of various materials of leaves, broken pieces of wood, and grass clippings,” said Hutton.

Annually, the 16 acres of gardens and greenbelt attracts 35,000 visitors.

According to AccuWeather, not only has the mild weather affected Florida, northern states in the Midwest also have been dealing with Mother Nature.

Farmers have major concerns due to the weather because wheat crops may be affected by the absence of snow, which insulates the soil.

Walker said, “We have to follow the city water restrictions with ground irrigation.”

The majority of the current water restrictions are two-day per week watering in Tampa Bay counties such as Hillsborough, Polk, Pinellas, Manatee, and Pasco, according to Southwest Florida Water Management.

As summer approaches, student tour guides show prospective students and their parents around campus. The tour guides above started with the Marshall Center, which is one of the University of South Florida’s newest buildings. The Marshall Center is the heart of student life on campus, where students eat lunch, study and socialize with their fellow students. Photo credit: Ryan Gentry

A Day in the Life: Thor visits the bookstore 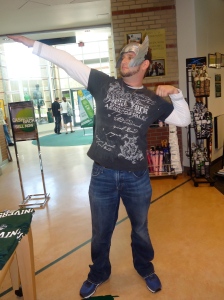 Junior Jonathan Borda, a former Beef Stud, shows off his masculinity as he poses as Thor in the University of South Florida bookstore. For his Viking History class, he had to present a project with two other students, and he chose to wear the Thor helmet. Thor is a god who represents strength through thunder and lightning in Norse mythology. "My group choose me to be Thor because I have the beard," he said.

Day in the Life: concert rocks at the Marshall Center Amphitheater

The lead guitarist of Aletheia Church of Tampa’s rock band set up for a concert this evening in the Amphitheater of the Marshall Center for the students of the University of South Florida. Red and black balloons were set up and excited students were dressed in casual attire to enjoy the concert. The concert ran from 7 p.m. until 9 p.m. and free chips and drinks were served. It was a great way for the studious students in the Marshall Center to catch a break from studying.

Day in the Life: Getting a ticket for parking behind the library

A campus parking official is issuing a parking citation in lot 29 B, which is located directly behind the USF Library and to the left of the Communication and Information Sciences Building. The student had an S sticker, which is not allowed in that lot.

Day in the Life: Taking time out to shoot some hoops

Tyler Sinclair, a junior at the University of South Florida, takes advantage of a picture perfect day by playing basketball. After raining all weekend, Monday brought in clear skies and a crisp, cool breeze, enticing everyone to come outside. Sinclair sparingly puts stress on his knee, which has been under the knife several times. However on beautiful days such as this, he could not resist.

Day in the Life: Stand for a cause, stand for the Gulf

Photo Credit: Kerriann Thompson
On April 23, 2012, the University of South Florida’s, Student Environmental Association, gathers students to take pictures for Southern Energy Network’s “Stand with the Gulf Petition”. The petition is a tribute to the victims of the BP oil spill of April 20, 2010. “We are going to send the banner to the Mississippi Gulf and they will hang it for 86 days in remembrance of the 86 days that the oil spilled,” Shaza Hussein, SEA’s Director of Networking, said. Hussein also said that SEA will send the pictures to Sen. Bill Nelson to show that Floridians are supporting the Gulf and clean energy.

Day in the Life: Post-honeymoon snap back to reality

USF College of Nursing pre-nursing advisor Andy McDuffie (left), shows off her wedding band to coworker Valerie Jaquith. This is McDuffie’s first day back to work since her honeymoon in Italy. “I was there for ten days. Florence had the best food, but I absolutely loved Venice because it was so picturesque,” said McDuffie. “Welcome Back” signs in Italian greeted McDuffie as she walked in her office this morning. “I cried a little inside when I saw the 333 e-mails in my inbox but was excited to see my co-workers.” With an upcoming orientation, McDuffie feels overwhelmed with the reality.

Day in the Life: Creating climate and environmental awareness 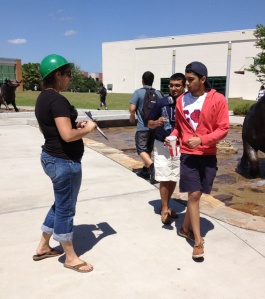 Jacquie Ayala, Campus Organizer for the regional organization Southern Energy Network, intercepts students on campus to raise awareness for climate and environmental issues at 2:45 p.m. on Monday, April 23rd in front of the Marshall Student Center at USF. The Southern Energy Network works on grassroots campaigns for environmental causes. Partnering with the USF Students for Environmental Action, members encourage students on campus to register to vote in the upcoming Presidential election. By encouraging voter registration, members aim for climate issues to be challenged and environmental progress to be made.