Melissa Willoughby has written 3 posts for The Digital Bullpen

A wheelchair and spina bifida will not deter a University of South Florida singer from her Broadway musical performance goals.

Schwartz, a junior majoring in theatre performance, dreams of singing on Broadway and is determined not to let anything stand in her way, including her wheelchair.

She was born with spina bifida, a congenital birth defect which damages the nerves to her legs, among other side effects. She will never walk, never dance.

She knows that being wheelchair bound limits her opportunities on stage, but hopes that it doesn’t completely count her out.

“Let’s be real,” Schwartz said. “People will probably be a little bit less willing to hire someone who is actually disabled for a part. I mean, even in “Glee”, Artie is not really disabled in real life.”

Schwartz has studied acting and singing for more than 10 years. She has been involved in multiple school and community productions. In 2006, she landed her first major singing role as Mrs. Dilber, Scrooge’s housekeeper, in the musical “A Christmas Carol”. Last year Schwartz was hired for her first professional acting role, a roaming zombie for Busch Garden’s Howl-O-Scream scare zones.

Her passion for theatre is obvious. Her dorm room is plastered with  Phantom of the Opera posters. The silver bracelet on her wrist sports charms from Les Mis, her favorite play. Even in her down time, she can be found acting in live action role-playing games around campus.

“You know that whole thing about how you get 10 no’s and a yes? I’m going to keep going until I get that yes.”

Schwartz isn’t fazed by her prospects. Too many aspiring actors never make it to Broadway. It is perseverance that will set Schwartz apart. Perseverance and her voice, that is.

Day in the Life: Evangelizing for better exam scores 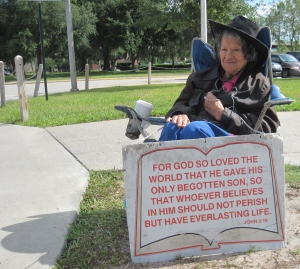 Jenny Harrell, along with her pastor Evans Johnson, exercises her freedom of speech by sharing her religious beliefs at the University of South Florida. Harrell, unlike some of the fire and brimstone preachers on campus, speaks of finding love and harmony through Christ. She comes to USF on at the start of finals week to “give the children a little luck on their exams,” says Harrell. “Say a little prayer before you go in. The Lord can hear you.”

Tampa was listed as the second dirtiest smog-polluted city in Florida in a September 2011 report by PennEnviroment Research and Policy Center.

“There is a direct effect between air pollution and health,” said University of South Florida Professor Connie Mizak.  “When it comes to air pollution, the primary health effects are respiratory and cardiovascular. So when there is an increase in particles in the atmosphere … that is directly related to an increase in cardiovascular events such as heart attacks and strokes in individuals.”

Smog, or ozone, is a type of air pollution created when certain chemicals in the atmosphere are exposed to sunlight. Smog-forming pollutants are largely emitted by car exhausts, power plants, and industrial fumes. In Tampa, rising air pollution is most likely due to long, intense summers coupled with increasing population.

According to PennEnvironment’s report Danger in the Air, Tampa experienced two smog days in 2011 when air pollution exceeded the current National Ambient Air Quality Standard, or NAAQS. In 2008, the Environmental Protection Agency revised the ozone NAAQS from 84 parts per billion to 75 parts per billion, despite the EPA’s own independent scientific advisory panel’s objection that the standard was still too high to be safe for humans.

“For ozone, we don’t have any areas in Florida showing monitoring data that indicates that the air is unhealthy for humans,” said Lynorae Benjamin, Chief of the Regulatory Development section of the EPA, in a January 30 phone interview.

“We are under current review of whether [0.075 ppm] is still protective … but the previous administrator of the EPA made the decision that it was protective of human health and the environment.”

As economic development increases in Tampa, so does air pollution.

“It comes down to, if we can minimize our pollution, we’ll find there will be significant health benefits,” said Joseph Michalsky, president of USF’s Student Environmental Association. “It’s the air you breathe. It affects the world you live in. It affects human health.”

The Clean Air Scientific Advisory Committee unanimously recommended a decreased ozone standard of 60 to 70 ppb as better protective of human health.  In compliance with this more stringent standard, Danger in the Air raised Tampa’s smog days to 10, with the highest concentration of ozone recorded at 87 ppb.