USF Tri-Bulls upset with lack of funding from Student Government

USF’s Tri-Bulls Triathlon Club is struggling to get the necessary funding from Student Government.

“It really frustrates me that SG doesn’t give much to our club,” said Allison Chalifoux, a USF Tri-Bulls member. “We are put on the back-burner partly because I don’t think they understand what our club entails and how much it costs. They don’t understand the amount of dedication, hard work and hours of training that goes into triathlons.”

A triathlon race includes three separate parts: cycling, running and swimming. It is actually considered to be five events because of the two transitions. Athletes compete for the fastest times, according to USF Tri-Bulls Vice President Stephen Zaffari.

During the club meeting on Jan. 25, members stated that last semester they requested $15,000 from SG and only received about $5,000. This semester, Danielle Cummings, the club’s president, is requesting approximately $28,000.

“The money is spent on race fees and any left over goes to travel and lodging,” Cummings said. “I try to allocate it as fairly as possible.”

Sprint and Olympic races cost between $60 and $90, not including travel and lodging. Nationals cost $175 per student. Students usually have to pay about 50 percent out of pocket, Cummings said.

“I have to limit what races I do and how many races I do because of cost,” Chalifoux said. “I wish I could do one a month but, unfortunately, it doesn’t work out that way.”

The USF Tri-Bulls have to pay $194 each for a uniform, which includes a top, jacket, bottoms and one-piece.  The right equipment can be expensive, especially since USF does not provide it. An average road bike will cost between $800 and $1,000 and a tri-bike will cost between $1,200 and $4,000, according to Cummings.

Cummings and Zaffari encourage members to find sponsors and fund raise to help with their funding.  However, some fundraisers in the past, like car washes, have not always been productive, Zaffari said.

“I think the sport turns many people down because of the expenses,” Cummings said.

Day in the Life: Study outdoors, pooch in hand 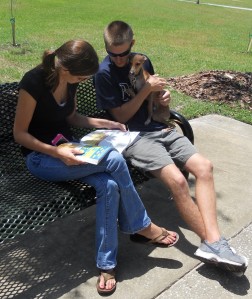 University of South Florida students have already begun studying for their final exams next week.   Studying in a confined area can cause tension and anxiety for some students.  To escape the crowded library, these students took advantage of the beautiful weather outside today on Apr. 23.  A little fresh air can help clear your mind.  “It’s also a nice stress reliever to play with my dog during study breaks”, Jared Wynn, USF junior, said.