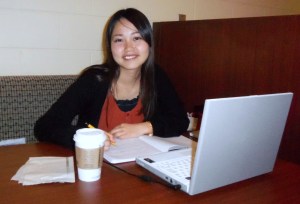 Walking in to Japanese class on Halloween day, Aiko Sasaki was surprised to see students dressed in costumes.

In Japan, students attend class dressed in their best clothes, and in the United States, students are more informal, Sasaki said. Because she has been in Florida for six months, she is used to seeing students in casual clothes like jeans and T-shirts. Yet nothing could prepare her for the Halloween costumes she saw students wearing in class that day.

Sasaki is from Japan and is studying international relations at the University of South Florida. She came to USF to perfect her English.  At the same time, she is learning more about American culture and how different it is from Japanese culture.

Sasaki said the one thing that she likes about America is people have their own ideas and are confident about expressing them. “Japanese people never do that. It is not the polite way, but American people don’t care,” she said.

Sasaki is sure Japanese people have their own ideas but are hesitant to express them.

Being cautious when expressing opinion comes from Japanese culture, specifically, the way a person treats others. From a young age, the Japanese are taught to be respectful to their elders and cooperate with others, Sasaki said.

She also said that this attitude is engraved on the students, making their learning process more passive. Students concentrate on listening to the teacher and taking notes, which provides fewer opportunities for students to express themselves. Japanese students are also shy and are afraid of answering incorrectly.

“I have not expressed my opinion in class, but I will,” Sasaki said.

Breaking away from the constrained society of Japan is harder than she expected. Because of her upbringing and her naturally shy personality, Sasaki has yet to embrace the freedom that American students have, but she is excited to do so before she goes back to Japan.